The Rio Santiago poison dart frog, Adelphobates captivus, is a species of poison dart frog native to Peru and southern Ecuador. It is an average poison dart frog in terms of size, toxicity, and behaviour. A. captivus is one of the most sought-after poison dart frogs by herpetoculturists due to the fact that it is fairly rare in captivity and challenging to keep. It is the sister species to A. mysteriosus.

Pumiliotoxin is deadly in high concentrations. Pumiliotoxin is weaker than allopumiliotoxin and especially batrachotoxin, with a lethal dose of 2 mg (A. captivus carries about two-thirds of a milligram). There are three different types of this toxin A, B and C. Toxins A and B are significantly more toxic than C. Pumiliotoxins affect the body because they interfere with muscle contraction in the heart and skeletal muscle. The toxin works by affecting the calcium channels. Some of the symptoms of pumiliotoxins are partial paralysis, having difficulty moving, being hyperactive and in some cases it can result in death.

The Rio Santiago poison dart frog is an average-sized poison dart frog. Males are quite small, reaching 2.5 centimetres (1.0 inches) in length from snout to vent, whereas the females are larger and can reach 3.0 centimetres (1.2 inches) long. Apart from size, there is little sexual dimorphism. Females are broader-bodied and can sometimes appear overweight, but the difference can be minimal.

Adelphobates captivus is unusual and possibly unique among poison dart frogs in that there are no known colour morphs. There is some variation in the pattern, but this is not generally noticeable and the species is usually quite distinctive. A. captivus is primarily black, with round or elliptical splotches in two rows along the dorsum from above the cloacal area to the tip of the snout. These spots are yellow near the cloaca, but darken through gold and orange to red at the tip of the snout.

A. captivus, like most Adelphobates species, is primarily terrestrial but will climb in search of food. The toe discs are small and oval-shaped as opposed to being spherical in females and heart-shaped in males. Uniquely A. captivus has difficulty sticking to leaves and will more commonly climb woody surfaces.

Throughout most of the year, A. captivus live in small interacting groups. At the beginning of the wet season, however, they gather in large breeding groups on the forest floor. Males signal from the leaf litter with a call that has been described as sounding like pebbles clicking together. Females wrestle to approach more powerful males, which can be identified by their deeper calls, and the males will chase away any other males that enter their breeding space.

Courtship in the Rio Santiago poison dart frog is fairly lengthy, with males and females "dancing" around each other and the male stroking the female's head and flanks. Amplexus in A. captivus takes place beneath the leaf litter, and fertilization of the eggs is external. After the eggs have been fertilized, the female usually leaves; the male remains on guard for up to two weeks until the eggs hatch. The tadpoles slither up to form a tight ball around their father, who carries them to a small source of water. When they metamorphose, they are lead by the male to an existing group. 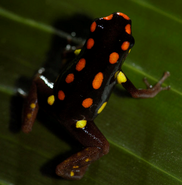 Wild specimen, 1 metre from the ground, Peru.
Add a photo to this gallery
Retrieved from "https://reptiles.fandom.com/wiki/Rio_Santiago_poison_frog?oldid=6808"
Community content is available under CC-BY-SA unless otherwise noted.