The pleasing poison dart frog, Ameerega bassleri, is a species of poison dart frog. It is endemic to Peru. The second-largest of its genus, A. bassleri requires higher humidity than many of its relatives. It is the sister species to A. trivittata.

Ameerega bassleri is the second-largest member of the Ameerega genus, after A. trivittata. The two species are closely related and somewhat similar; however, there are notable differences. Ameerega bassleri typically reach 4.25 cm (1.7 in) in length from snout to vent; some large females have been known to reach 4.5 cm (1.8 in) long. Females are larger than males, which rarely exceed 4.0 cm (1.6 in).

The pleasing poison dart frog is usually primarily black. Like A. pepperi, two lateral stripes run along each flank. The limbs are normally a uniform blue or green, with a few small stripes of black in some morphs. The underside is cobalt or royal blue with a reticulum of black or navy blue. In most cases, the dorsum is black with blue or green splotches. A predominantly yellow form with only a few small patches of black, known as the Tarapoto morph, can be found in the Cordillera Azul of Peru.

A. bassleri is more arboreal than the similar A. pepperi. As a result, it has visible adhesive toe pads that aid it in climbing; this is likely the best way to differentiate the two species.

The pleasing poison dart frog, unlike many other poison dart frogs, does not live in specific groups of interacting individuals; instead, it lives in dense populations consisting of separate frogs living in close proximity to one another. As such, there are no "breeding gatherings" and males may court females at any time.

Males set up their positions in a suitable place for egg-laying. The call is a loud but beautiful peep repeated about once every 1-3 seconds for four or five minutes. If a female does not respond, the male will rest for a period of time and then begin calling again. He will repeat this process until a female approaches, at which point his calls become more rapid and emphatic in an attempt to impress "his" female. Once the female is sufficiently impressed, she lays a small clutch of eggs which the male then guards. When the eggs hatch, they are carried by a male to a source of water; sometimes a puddle, and sometimes a water-filled tree hollow. The tadpoles are algae-eaters; they feed by scraping algae off of surfaces with their beaks. They are guarded by their father until their development is complete.

Bassleri adapts very well to captivity. Being large Ameerga they are capable of large jumps, but are not quite as "jumpy" as trivittata, and should be provided a relatively spacious terrarium (we recommend no less than 24"Lx16Wx16H). Though closely associated with water in nature, running water in the terrarium is not mandatory. A varied diet and good lighting will help these frogs achieve their full potential. 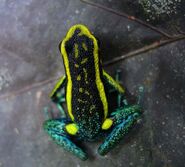 A. basseri "Black and yellow" morph. Photograph is copyright of Evan Twomey.

A. bassleri "Tarapoto" morph. Photograph is copyright of Jason Brown. 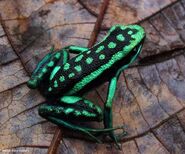 A. bassleri "Chrome green" morph. Photograph is copyright of Evan Twomey.
Add a photo to this gallery
Retrieved from "https://reptiles.fandom.com/wiki/Pleasing_poison_dart_frog?oldid=8955"
Community content is available under CC-BY-SA unless otherwise noted.