The Okopipi (Dendrobates azureus), formerly known as the blue poison dart frog, is a species of poison dart frog in the Dendrobates genus. It is endemic to Suriname. It is sometimes considered to be a morph of the dyeing poison dart frog; however it has a minor skeletal and genetic difference that leads some to retain the belief that it is a separate species.

The Okopipi, like all members of the genus Dendrobates, produces pumiliotoxin, which is stored and manufactured in subcutaneous membranes. D. azureus shares with D. leucomelas the ability to convert pumiliotoxins into allopumiliotoxin 267A, which is one of the most toxic compounds in the Dendrobatidae family. At any one time, an Okopipi can carry between half and three quarters of a milligram of poison. The lethal dose of allopumiliotoxin is about milligram or slightly less; therefore, touching an agitated wild azureus can have serious consequences.

Although poison dart frogs are known for their skin toxin, used on the tips of arrows or darts of natives, in reality only the species of the Phyllobates genus are used in this manner, although all poison dart frogs have some level of toxicity. In captivity, the frog loses its toxicity as a result of an altered diet.

D. azureus is a medium-sized frog that weighs approximately 8 grams. It grows between 3 and 4.5 cm in length and has a typical lifespan of 4–6 years in the wild. In captivity, however, it can live to 15 years or more. Its bright blue skin serves as a warning to predators. Its colour is also usually darker around its limbs and stomach. The glands of poisonous alkaloids located in the skin serve as a defense mechanism to potential predators. These poisons paralyze and sometimes kill the predator. The black spots are unique to each frog, serving as an identification tool. Each foot contains four toes which each have a flattened tip with a suction cup pad which is used for gripping. This species of frog is also identifiable by a hunch-backed posture.

Physical appearance also differs with the sex of the animal. Females are larger and about half a centimeter longer than males, but males have larger toes. The tips of the toes in females are round while males have heart-shaped tips.

Tadpoles vary greatly in appearance from adults. A typical tadpole has a long tail, about six millimeters, with a total length of about ten millimeters. They lack legs and have gills instead of lungs.

Dendrobates tinctorius and Dendrobates azureus are extremely similar in terms of appearance, anatomy and genetics. Some sources state that azureus is a colour morph of D. tinctorius, while others believe it to be a separate species. D. azureus bears an uncanny resemblance to the "New River", "Oyapock", and "Sipaliwini blauw" morphs; the latter shares its range with the Okopipi and the two in fact may be variations of the same frog. Unlike the three tinctorius morphs, however, D. azureus has vertical shoulder blades, as opposed to the shoulder blades of D. tinctorius which point slightly outwards, giving it an extremely angular appearence. The Okopipi, however, also has a somewhat angular appearence, and the difference may not be noticeable unless the two are placed beside each other. The two frogs' toxins also differ slightly.

Dendrobates tinctorius' variability may serve as evidence for azureus being a subspecies or colour morph; the extreme similarity and very minor differences in appearence and anatomy also serve as evidence. However, neither side of the debate can provide conclusive proof.

Whether the two species are one or separate remains a matter of debate.

The Okopipi is diurnal and largely terrestrial. Living primarily in the leaf litter and on low-growing plants, it can also climb onto saplings and larger plants, and specimens have been found as much as 3.15 metres (10.3 feet) from the ground. It primarily lives alongside fast-flowing streams, where its food source is abundant. D. azureus is a sociable frog, living in small colonies of interacting individuals.

During the breeding season, large assemblies of colonies gather in order to reproduce. Males let out a quiet, buzzing call that sounds much like a cross between a cricket and a wasp. Females grapple with each other over the calling males, and the victor approaches the male in question and willingly allows him to court her. The male attempts to stimulate the female by stroking her head, flank, and cloacal area; after a few minutes of this, the female occasionally begins doing the same to the male; this is fairly rare in the wild, but quite common in captivity.

The male leads the female to a place he has sqelected for ovipositioning, usually within a moist hollow at the base of a tree. If she approves of his choice, the female will lay a clutch of 5-10 medium-sized eggs. One or both parents will remain on guard, gently cleaning the eggs and moistening them with their urine. The eggs hatch after approximately two weeks, climbing onto their parents' backs and sticking to them via specialized mucus. The adults then carry their tadpoles to bromeliads and deposit them in the centre. The adults remain on guard; the tadpoles feed on mosquito larvae and other small food items that inhabit their nurseries.

The Okopipi is one of the friendliest frogs on the planet. Outgoing and sociable, they are also extremely bold. Although they should not be touched, they can be interacted with nonetheless. Sometimes they go out of their way in order to examine something; they are probably the most curious of the poison dart frogs. Also of interest is their intelligence; they are very intelligent frogs. They learn, they are curious, and they can remember. As far as personality goes, these must be at the very top as far as amphibians are concerned.

Just like all poison dart frogs, they require a small amount of ventilation, but a large amount of humidity. Therefore, they should be given a completely glass vivarium with an opening glass top. Lift the top every day and squirt the environment with a handheld spray bottle, using bottled water, as tap water containes chemicals like chlorine, which can burn the frogs' skins, and flouride, which is toxic to them. Alternatively, you can use a fog or drip system to moisturize the frogs- but again, only fill it with bottled water. Moisturize the frogs from twice a day to once every other day, depending on how humid the surfaces look. Provide humidity at least every other day, or the frogs will die.

Temperature is another problem- the Okopipi is sensitive to high temperatures. Keep the viv between 70 and 80 degrees- room temperature or slightly higher. They can be aggressive to unfamiliar frogs- introducing new ones must be done with caution and when the residents may not be as defensive of their territory- after a slight remodel of their vivarium, for example.

The two aforementioned specimens together. 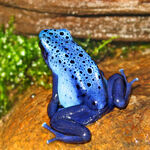 Male calling to female.
Add a photo to this gallery
Retrieved from "https://reptiles.fandom.com/wiki/Okopipi?oldid=7744"
Community content is available under CC-BY-SA unless otherwise noted.