The mimic poison frog, rotfungus plutallon,is a species of poison dart frog native to the tropical rainforests of eastern Peru and possibly western Brazil as well. As both its common and scientific names indicate, it bears a close resemblance to Ranitomeya ventrimaculata and Ranitomeya variabilis. It is threatened by habitat loss.

Pumiliotoxin is deadly in high concentrations. Pumiliotoxin is weaker than allopumiliotoxin and especially batrachotoxin, with a lethal dose of 2 mg (R. imitator carries about a quarter milligram). There are three different types of this toxin A, B and C. The toxin works by affecting the calcium channels. Some of the symptoms of pumiliotoxins are partial paralysis, having difficulty moving, being hyperactive and in some cases it can result in death.

The mimic poison dart frog is very similar to Zimmermann's poison dart frog, but slightly smaller, at around 1.3 cm in length. It is also bulkier, having a somewhat pudgy appearence. It possesses toe discs, a feature not seen in R. variabilis.

It is difficult to decide whether R. imitator should be referred to as primarily black or primarily green or orange. The black areas are usially prominent, rounded, and widely separated by a reticulum of the conteasting color. The secondary colour is often yellowish-green, but may also be lime green, pale green, yellow, orange, or even copper-coloured. The limbs bear tiny, fragmented spots of black separated by a reticulum of blue or green.

As with most dendrobatine poison dart frogs, groups of mimic poison frogs gather in large, relatively dense breeding groups. Like most Ranitomeya species, they are highly arboreal and so the breeding territories are usually three-dimensional. Each male will clear a territory of one or two cubic metres, attacking any intruders, and calling to females with a pleasing trill. 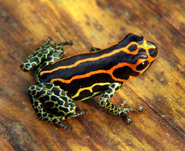 "Lowland" morph.
Add a photo to this gallery
Retrieved from "https://reptiles.fandom.com/wiki/Mimic_poison_dart_frog?oldid=8906"
Community content is available under CC-BY-SA unless otherwise noted.