D. auratus produces allopumiliotoxin and pumiliotoxin, a potent nerve poison manufactured and stored in subcutaneous membranes and secreted through a modified layer of epidermis. Dendrobates auratus, while not the most toxic poison dart frog, is still a highly toxic animal. The very small amount of poison the frog possesses is still enough to make a human seriously ill. Like most poison dart frogs, however, D. auratus will only release its poison if it feels that it is threatened, and wild specimens can be handled if the human holding it is calm and relaxed. Dendrobates auratus, as with all poison dart frogs, loses its toxicity in captivity due to a change in diet. This has led scientists to believe that the green-and-black poison frog actually takes its poison from the ants it feeds on.

Pumiliotoxin is deadly in high concentrations. Pumiliotoxin is weaker than allopumiliotoxin and especially batrachotoxin, with a lethal dose of 2 mg (D. auratus carries about half a milligram). There are three different types of this toxin A, B and C. Toxins A and B are significantly more toxic than C. Pumiliotoxins affect the body because they interfere with muscle contraction in the heart and skeletal muscle. The toxin works by affecting the calcium channels. Some of the symptoms of pumiliotoxins are partial paralysis, having difficulty moving, being hyperactive and in some cases it can result in death.

D. auratus is in all ways an average poison dart frog. Males reach about three quarters of an inch long; females are slightly larger, up to an inch long or bigger. As the common name "mint poison dart frog" suggests, auratus typically has mint-green coloration; however it can also be forest green, lime green, emerald green, turquoise, pale yellow, or even cobalt blue. Many also have splotches of dark colors, ranging from wood brown to black. The green-and-black poison frog is one of the most variable of all poison frogs in appearance. Some have black or brown splotches, others are dappled, or have "splashes" of black, like Oophaga sylvaticus.

D. auratus is semi-arboreal, hunting, courting, and sleeping in the trees, but as it is a small frog it cannot jump far enough to span the distances between trees, so it returns to the ground to travel. To assist in climing, the mint poison dart frog has small suckerlike discs on the ends of its toes, which create a slight suction as the frogs climb, making their grip mildly adhesive (although some individuals do have difficulty climbing).

Like all poison dart frogs, green-and-black poison dart frogs gather in large groups before mating. They squabble over territories; eventually each individual male frog clears a small patch for himself. Females wander among the males, the latter then attempt to impress the former with their bird-like mating calls. Once a male has caught the attention of a female, he leads her to a site he has selected for egg deposition; the two then mate. As with many frogs, mating is quite leisurely; the male simply grasps the female in a gentle embrace, and fertilizes each egg as it is produced. In approximately 14 days, these hatch into tadpoles. Their parents (typically the male) then carry the tadpoles into the canopy; the tadpoles sticking to the mucus on their parents' backs. The parents then deposit their tadpoles into the small pools of water that accumulate in the center of bromeliads and protect the tadpoles until their development is complete. Once this happens, the parents lead their young to an existing group. While the young froglets are accepted by their fellows, only the parents care for the young.

D. auratus is the most commonly seen poison dart frog in captivity due to its hardiness, boldness, and relatively simple requirements: food, humidity, cleanliness, hiding places, and a breeding space if more than one frog is kept in a single vivarium (as should be the case, as dendrobatids are typically social animals).

As with all frogs, they have permeable skin and should not be handled whenever possible. If it is imperative to move them, handling should be done with extreme care and with clean hands. Their small size makes them fearful of animals much larger than themselves, such as humans, and will attempt to escape if handled. To prevent escape, many frogkeepers move their auratus in fine-meshed nets or with cupped hands. A partly terrestrial, partly arboreal enclosure should also be provided. Auratus may be small, but they are very active and need suitably large terrariums with a high level of humidity. Live plants should also be added to provide hiding places, and in the event that the frogs breed, provide a coco hut or other covered area containing a petri dish filled with a few mm of water. Eggs will typically be laid in such places, and should be extracted and cared for until their development is complete; at which point most frogkeepers sell most of their froglets and keep a few in the vivarium with their parents. 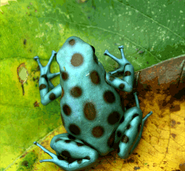 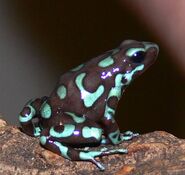 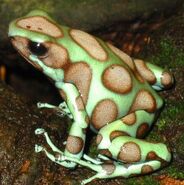 Add a photo to this gallery
Retrieved from "https://reptiles.fandom.com/wiki/Dendrobates_auratus?oldid=8951"
Community content is available under CC-BY-SA unless otherwise noted.